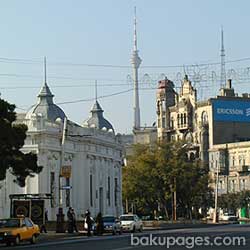 Baku or Baky (Baki), capital and largest city of Azerbaijan. The population is 1,149,000 (1990 estimate). The city is close to major petroleum fields near the border with Iran, and oil refining is its chief industry. Petroleum was extracted in the Baku region as early as the 8th century. The first historical reference to Baku dates from AD 885, although archaeological evidence indicates a settlement there several centuries before By the 11th century AD, Baku was in the possession of the Shirvan-Shahs, who made it their capital in the 12th century, although for a period in the 13th and 14th centuries it came under the sway of the Mongols. In 1723 Peter I the Great captured Baku, but it was returned to Persia in 1735; Russia captured the town finally in 1806. After the Soviet victory over the republic, the Transcaucasian Soviet Federated Socialist Republic was declared in 1922, with Baku as its capital. Baku served as the capital of the Azerbaijan Soviet Socialist Republic from 1920 to 1922 and from 1936 to 1991. In 1991 Azerbaijan became an independent republic (See Azerbaijan Chronology). The core of present-day Baku is the old town, or fortress, of Icheri-Shekher. Most of the walls, strengthened after the Russian conquest in 1806, survive, as does the 90-ft (27-m) tower of Kyz-Kalasy (Maiden's Tower, 12th century). The old town is highly picturesque, with its maze of narrow alleys and ancient buildings. These include the palace of the Shirvan-Shahs, now a museum, the oldest part of which dates from the 11th century. Also of the 11th century is the Synyk-Kala Minaret and Mosque (1078-79). Other notable historic buildings are the law court (Divan-Khan), the Dzhuma-Mechet Minaret, and the mausoleum of the astronomer Seida Bakuvi. Around the walls of the fortress, the regular streets and imposing buildings of modern Baku rise up the slopes of the amphitheatre of hills surrounding the bay. Along the waterfront an attractive park has been laid out. Most industrial plants are located at the eastern and southwestern ends of the city. Greater Baku, divided into 11 districts, encompasses almost the entire Apsheron Peninsula and 48 townships. Among these are townships on islands off the tip of the peninsula and another built on stilts in the Caspian Sea, 60 mi (100 km) from Baku. The basis of Baku's economy is petroleum. The presence of oil has been known since the 8th century, and by the 15th century oil for lamps was obtained from surface wells. Modern commercial exploitation began in 1872, second only to Ploesti in Romania. The Baku oil field at the beginning of the 20th century was the largest in the world, and it remained the largest Soviet field until the 1940s. Today much of the oil has been exhausted, and, although some wells remain in the city itself. However, new oil resources were found in the sea area near Apsheron. Azerbaijan is well placed to become a major additional source of oil supplies for Europe in the next century. A critical element of Azerbaijan's long term success will be the availability of export routes to transport the crude to world markets. Baku is also a major cultural and educational center. Sources: Kosia-Smeda, Encyclopaedia Britannica, MS Bookshelf'98, BakuPages.com