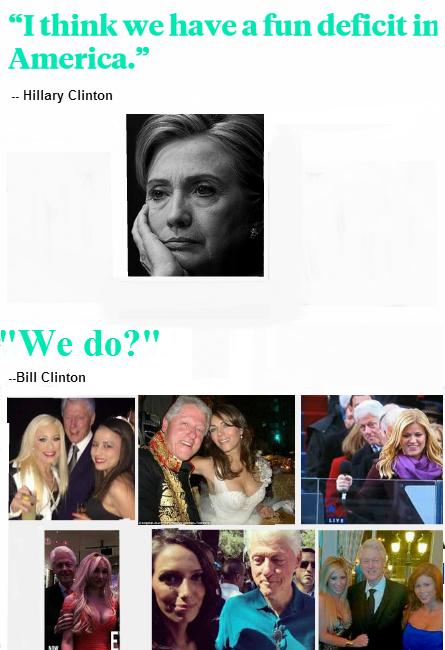 Russian hackers
had killed himself, according to police records...

HILLARY CLINTON’S ACOMPLISHMENTS
1) When she was an attorney working on the Watergate investigation, she was fired by her supervisor for “lying, unethical behavior.” Jerry Zeifman, a lifelong Democrat, was a supervisor for 27-year-old Hillary Rodham on the committee. When the investigation was complete, Zeifman said he fired Hillary and refused to give her a recommendation. “Because she was a liar,” Zeifman said. “She was an unethical, dishonest lawyer. She conspired to violate the Constitution, the rules of the House, the rules of the committee and the rules of confidentiality. 1 job - 1 failure

2) When Bill Clinton recaptured the governorship in 1982 he appointed his wife to head a special task force charged with reforming Arkansas’ education system, at that time widely regarded as the worst in the country. The plan Mrs. Clinton came up with showcased teacher testing and funding the schools through a sales tax increase, an astoundingly regressive proposal since it imposed new costs on the poor in a very poor state while sparing any levies on big corporations. The plan went through. Arkansas’ educational ranking remained abysmal. 2 jobs - 2 failures.

3) As First Lady of the United States, Bill gave Hillary another shot:
The Clinton health care plan, known officially as the Health Security Act, was a 1993 healthcare reform package proposed by the administration of President Bill Clinton and closely associated with the chair of the task force devising the plan, First Lady of the United States Hillary Rodham Clinton.
The plan was so wildly unpopular on all levels, it led to the Republicans simultaneously winning both the House and Senate in 1994 for the first time since 1953. 3 jobs - 3 failures.

4) Hillary's first ethics problem involving White House operations was
"Travelgate"
This Clinton scandal involves the discovery of over 900 Republican FBI files in the White House. Files of former Secretary of State A memo written by David Watkins depicted Hillary Clinton at the center of the 1993 travel office dismissals. Watkins wrote, "we both know that there would be hell to pay" if "we failed to take swift and decisive action in conformity with the First Lady's wishes."
May 19: seven White House Travel Office staffers were fired, for little apparent reason besides to make way for a company owned by Clinton's friends (Harry Thomason and Linda Bloodworth-Thomason) from Arkansas. Prior to the removal of the previous staff -- who historically would carryover from administration-to-administration -- Harry Thomason accused Travel Office employees of demanding kickbacks. An accusation later proved false. 4 jobs - 4 failures
"Filegate":
The White House FBI files controversy of the Clinton Administration, often referred to as Filegate, arose in June 1996 around improper access in 1993 and 1994 to Federal Bureau of Investigation security-clearance documents. Craig Livingstone, director of the White House's Office of Personnel Security, improperly requested, and received from the FBI, background reports concerning several hundred individuals without asking permission. The revelations provoked a strong political and press reaction because many of the files covered White House employees from previous Republican administrations, including top presidential advisors. Under criticism, Livingstone resigned from his position. Allegations were made that senior White House figures, including First Lady Hillary Rodham Clinton, may have requested and read the files for political purposes, and that the First Lady had authorized the hiring of the underqualified Livingstone
James Baker, former National Security Advisor Brent Scowcroft, and Newt Gingrich's spokesman Tony Blankley were found to be on this list. Upon the discovery of these files, the White House issued an excuse claiming that the files were mistakenly requested by a White House employee working with an outdated list. They were called a simple "snafu." Investigations into Filegate revealed that not a common White House worker but the President's friend and close advisor, Anthony Marceca, had requested the files. When the presidency starts illegally compiling an enemies list it is a sure sign he is not fit to serve office and that, just maybe, a crime has been committed. Craig Livingstone, director of the White House's Office of Personnel Security, had improperly requested, and received from the FBI in 1993 and 1994, background reports without asking permission of the subject individuals. Livingstone seemed to lack qualifications for even this position; he had worked on a number of Democratic Party campaigns and transitions, including being an advance man for the Clinton-Gore 1992 campaign, and his only prior job in the "security" field was that of a local bar bouncer at a Washington, D.C., night club. An FBI document suggested that Livingstone had been given his position because First Lady Hillary Rodham Clinton was a friend of Livingstone's mother and recommended him. In 1999, Clinton gave a sworn statement that she had nothing to do with Livingstone's hiring. Livingstone also stated under oath there was no truth to the supposed hiring relationship. Hillary Clinton would later refer to the whole files matter as a "pseudoscandal" while we won't classify Hillary's involvement here as a job, she certainly did nothing to make a situation better, and it's rather obvious she helped make it worse.

6) As Secretary of State:
- " Re-Set " button with Russia - How'd THAT work out ? - 5th failure
- " Arab Spring " - ditto - 6th failure
- Benghazi: it has become apparent that she knew it was terrorist attack while it was happening, yet STILL publicly spoke about the " video" as the cause for weeks. Supposedly was too distraught to go on the Sunday Moring talk shows the following week, so Susan Rice was sent out to lie instead. If true, and she was " too distraught" to face the nation, how can she be Commander-in-Chief ?
Still hasn't explained why she denied repeated requests for greater security in the weeks and months leading up to the attack ( even after Brits were attacked and subsequently left ). - 7th, a huge failure.
- Investigation into a series of cases involving sexual misconduct by both ambassadors as well as security personnel were called off on the orders of senior State Department officials on Clinton’s watch. Clinton’s chief of staff Cheryl Mills gave the order in one case while other top-level officials stopped other probes. The confirmation of the cases in an internal State Department memo shows a pattern of sexual misconduct—including on the part of those charged with protecting Clinton—that is troubling. But the manner in which higher-ups consistently suppressed these embarrassing investigations is even more worrisome. While Clinton is not personally named as the one ordering the cover-ups, the links between the secretary and those committing the bad behavior as well as those shutting down the probes are clear.
The most egregious in a list of potentially explosive stories involves Howard Gutman, the U.S. ambassador to Belgium who was accused of routinely ditching his security detail and then soliciting prostitutes, including minors. But Patrick Kennedy, the undersecretary of state for management, ordered the investigation shut down. - 8th failure
- Relations with China, Iraq, North Korea, Israel, Egypt... all worse than before she took over as SOS. For that matter, name a country with whom our relations improved while she was on the job. Can't, can you ? We'll count them all as one.. 9th failure